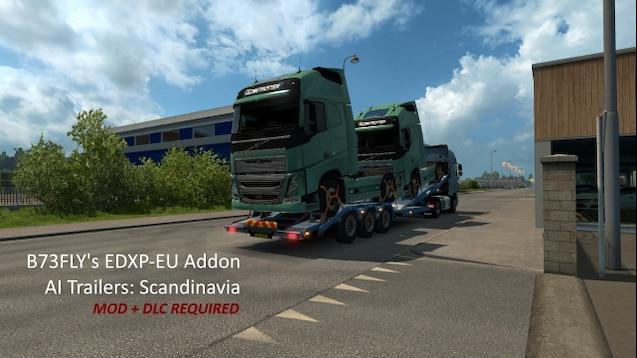 B73FLY’S EDXP-EU UPDATE V1.11.1 ETS2
DEFINITIONS
– Vehicles
– All AI cars, trucks, and buses have realistic engine torque and top speed.
– For every car, engine torque has been carefully researched. Each car will accelerate differently.
– Top speed for every car varies according to their tire specifications based on research from the Tire Rack website.
– Top speed for every semi-truck varies according to certain configuration and conditions (Euro maximum 90 km/h).
– Trucks pulling some oversized loads will travel according to the displayed speed number on their trailers.
– Top speed for every bus is 100 km/h. Most of them, if not all, have been at the correct setting.
– In traffic, there are more variety of trailers (empty and loaded).
– Combination Vehicles (CV) are included.
– Traffic density has been reworked.
– Special thanks to cipinho for letting me use part of his Real Traffic Density mod!
– World
– Traffic signals have longer and realistic timings.
– Green light interval is 20 seconds.
– Amber (yellow) light interval is 3 seconds.
– 5-second delay interval between signals.
– Every signal (except major ones) is disabled from 23:00 to 05:00.
SOUND
– AI
– Car, truck, and train sounds are emitted based on brand and engine specifications.
– Example: If you see an AI Scania with a V8 badge, you’ll hear the actual V8 sound as it drives past.
– Buses and smaller trucks utilize a specific diesel sound.
– Tire noises have been added to all AI vehicles.
– Horn sounds for both cars and trucks have changed.
– Police sirens are replaced with more realistic-sounding ones (Euro style, particularly German).
– For now, the sirens are German style until game code allows for multiple styles of sirens for certain countries.
– Environment
– Bad Spring/Summer/Fall Weather
– Rainfall is slightly louder, noticeable during heavy precipitation.
– Feel Thor’s power through your speakers with better thunder sounds!
– Bad Winter Weather
– When it is snowing, all you can hear is the sound of air (wind).
– Mover
– Sounds have been added to various movers such as flags, hot air balloons, and commercial airliners. Some sounds such as the helicopter have been improved
Quite a lot of new stuff! “Baltic Traffic Light Update”
– Re-worked sounds
– Better quality AI engine sounds, loudness versus displacement (petrol vs. diesel)
– Constant sound volume across all car and truck tires
– According to the poll votes, thunder will now play…
– slightly later (few seconds longer silence)
– slightly softer treble levels, but still retaining semi-heavy bass levels
– Adjusted traffic light timings in the Baltics
– NOTE: Some traffic lights will be temporarily disabled for 24 hours as a way for me to find them in order to fix them in the future.
– Help is greatly appreciated by reporting and sending me the location DURING DAYTIME in-game.
– Added more variety of trailer traffic
– Added “spawn_ratio” of 10% to some 80-kph low bed trailers
– Returned clocks set back 1 hour for Snow Version for certain areas