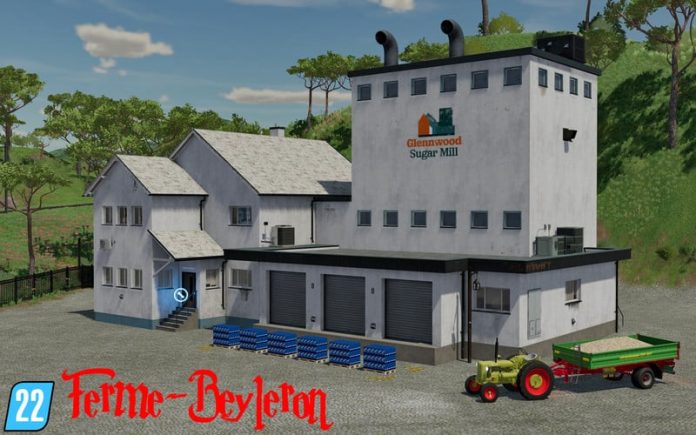 Ferme Beyleron v1.2.0.0 – FS22Version 1.2
* seedMaker installed on the extended farm for the production of seeds. (Thank you very much for the release!)
* Olive farm including a shelter and a water point.
* Pond at the farmhouse added as a free water supply point.
* A fence was drawn around the farmhouse including a few small embellishments.
* Additional manure pile structure installed next to the pigsty.
* The old ugly brown water barrel has been replaced by a fountain.
* PDA map updated.
* As a bonus, the Ferme-Beyleron comes with the MultiFillTRANS 7300 S, with which you can transport Herbicid for the seedMaker.
Changelog of Ferme-Beyleron v1.0 (The map was tested extensively in the SP and on the Dedi and the log is error-free – except GIANTS bugs)
Bonjour dear friends of LS 22, here now from me a rebuild of the Haut-Beyleron incl. numerous extensions.
And here now some data, what was changed or rebuilt.
* Extended farm with large cowshed incl. automatic feeder and manure heap superstructure, large pigsty, large sheep pen, large chicken coop, large horse stable, three large greenhouses incl. additional tanks, large mule silo NL16-22-16000 Multifrucht, large truck scale, large fuel tank, large driving silo, workshop, two shelters with back wall, large hall, shelter with solar roof, bulk material hall, Kärcher.
* Vineyard at the abandoned winery incl. finished grape vines and purchased plot.
* Tailor’s shop as additional production building directly next to the spinning mill.
* Sugar factory as an additional production building.
* Oil mill as an additional production building.
* Muesli factory as additional production building.
* Restaurant as additional sales point for harvest and production goods at the nearby lake.
* Pizzeria as additional sales point for harvest and production goods at the nearby lake.
* Fast food restaurant as an additional point of sale for crops and produce.
* Farm silo converted to multi-fruit incl. bale trigger.
* Small plough.
* Ball trigger for the three storage bunkers of the feeding robot (cow shed).
* And anything else I forgot to mention
Explanation of the two multi-fruit silos:
Practically everything can be stored here that can also be loaded by trailer and in detail would be the following:
Wheat, barley, oats, rape, millet, sunflowers, soybeans, maize, potatoes, sugar beet, sugar beet pulp, sugar cane, olives, grapes, mixed feed, fodder, mineral feed, chaff, wood chips, silage, poplars, grass, hay, straw, manure, pig feed, seed, fertiliser, lime, road salt, snow, stones.
Both multi-fruit silos have a bale trigger for silage, hay, grass and straw.
And now I wish you as much fun and joy on the new Ferme-Beyleron as I have.